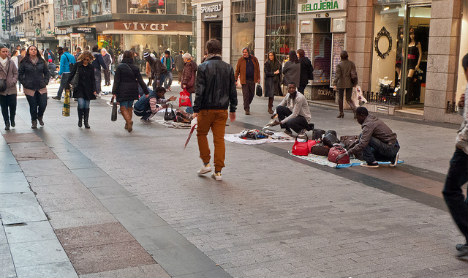 The man was killed during a police raid on street sellers. Stock photo: Den Williams / Flickr

Several hundred immigrants turned to protest over the death on Tuesday morning of the 50-year-old man who was being chased by police when he jumped from a third floor balcony.

The Mossos d’Esquadra, Catalonia’s regional police force, said the death occurred during an operation against a gang involved in the street sale of fake designer goods, a practice known as “top manta” in Spanish.

The as yet unidentified Senegalese reportedly fled a property being raided by the police force when he jumped from the balcony of his own accord and died at the scene.

The death provoked violent clashes between the police and the immigrant African community in the Costa Dorada resort 100km south of Barcelona with rubbish containers overturned and street furniture hurled at officers.

Photographs and video clips from eyewitnesses shared on social media show the clashes while state-rail operator Renfe confirmed that trains were disrupted due to a barricade on the rails. Police dispersed protestors by firing rubber bullets, La Vanguardia reported.

At least 16 people were injured during the clashes, including tourists, and one person was person arrested. Police said  they also detained 12 people during the dawn raids against the street hawker network.

Jaume Asens, a Barcelona politican from the Barcelona en Comú left wing party called the deceased “the first victim of criminalization of the poor this summer”.