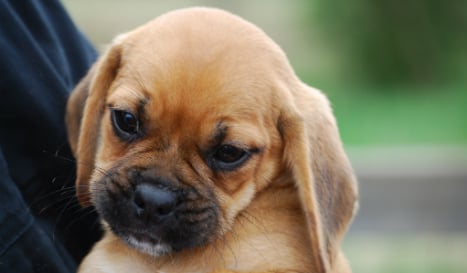 The young pup was described as "super scared" after the incident. Stock photo: Jim McCluskey/Flickr

The dog was thrown over the fence at around 9.30pm on Thursday August 6th according to a post by Os Palleiros de Ribeiro animal shelter on its Facebook page.

In the post, which was accompanied by a video of the incident, the animal refuge, in Pontevedra, northwestern Spain, condemns the actions of the two men, who pull up in a red car and carry the dog over to the fence.

“With no remorse, as if it was a bag of rubbish, he hits it, picks it up by his lead and leaves without looking back,” the shelter wrote on its Facebook page.

After struggling with throwing the dog over the fence, one of the men finally picks up the puppy by its lead, half climbs the fence and drops it over the other side. The two men then run to the car and quickly drive away.

The dog shelter said that it was “obviously” going to report the incident to police and urged anyone who recognized the two men in the video to get in touch with the national police.

As for the dog, the shelter said via its Facebook post that it was “adorable”, a young puppy  which is now “super scared” after what happened to him. The shelter added that everyone was helping to look after the pup.

The animal charity said it was overwhelmed with abandoned dogs and that animals being dumped over the fence had become a frequent occurrence. The animal shelter shared the video on its Facebook page (above).

The video, which has been shared over 120,000 times, provoked a strong response from commenters on Facebook, who slammed the two men for their actions, with many saying they could not finish watching the video it was so traumatic:

“How horrible!” wrote Andrea Barcala, “poor little thing… could you not see the license plate number?”

“What a horror!” wrote Marira Jose Rodriguez, “I hope that soon they will be able to trace the license plate.”

The shelter replied that the issue was now in the hands of the police and it hoped that justice would soon be done.

Just last week photos of a dog buried alive up to its head in France sparked an outpouring of anger on social media and police said the owner was taken into custody.

All aboard: Campaign for dogs on trains in Spain