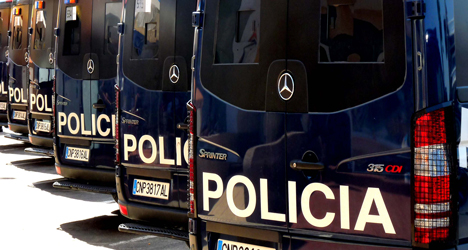 The arrests were carried out in Madrid, the Basque Country and Cantabria in the north and the Balearic islands in the Mediterranean, Spain's Guardia Civil police force said in a statement.

Sixteen Colombian nationals and seven Spaniards are among those arrested as part of the operation, which began in April 2014 after police received a tip that a bar in the northern port of Santander was selling drugs.

A police investigation concluded that the man who ran the bar “belonged to a criminal organisation run out of Colombia which had a base of operations in Madrid from where it distributed drugs,” the statement said.

Police suspect the ring distributed drugs to other smaller drug traffickers and to consumers at the bar, which was also used to launder money earned from drug trafficking.

The authorities seized 13 kilos (29 pounds) of dry marijuana, 25 marijuana plants, one kilo of cocaine as well as synthetic drugs like speed and crystal in searches of 17 homes carried out across the country.

They also dismantled a drugs laboratory set up in one of the homes that was searched.

“The members of the ring had extensive knowledge of policing and the technical means used to detect the surveillance which they could be subject to,” the statement said.