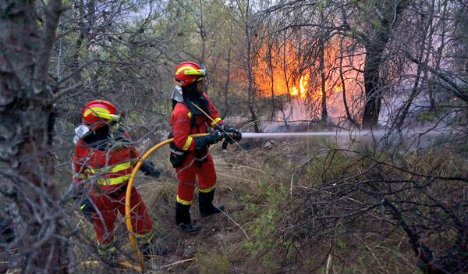 Authorities fear that at least 5,000 hectares of woodland have already been destroyed in the Sierra de Gata region of the western region.

Residents of two towns, Perales del Puerto and Acebo, were told to leave their homes as flames approached overnight on Thursday.

The regional president of Extremadura suggested that the fires may have been started deliberately.  “Five separate fires have broken out in this area,” said Guillermo Fernández Vara at a press conference on Friday.

“When fires occur in a concentrated area that is not particularly hotter or dryer than in the rest of the region we have to suspect that man has had a hand in it,” Vara said.

More than 200 firefighters were battling the blaze and a team of four water-carrying aircraft had been flown in in an attempt to dampen the flames.

Meanwhile in southern Spain sizeable wildfires raged across the Sierra del Almirez near Lorca and in Cieza both in the Murcia region.

Spain’s Environment Ministry reported that the number of separate large wildfires that had occurred so far this year far outnumbered those of the last two summers, although exact data was not available.

Spain suffered the hottest July on record while firefighters have been staging strikes over poor pay and conditions.

The Civil Guard issued a timely warning about the dangers of countryside barbecues in a tweet.