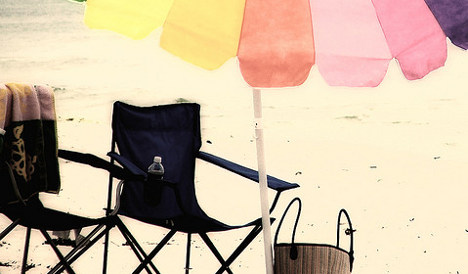 It’s one of the perennial bugbears of seaside holidays — arriving at an empty beach to find all the best spots have already been taken by people coming down to the beach at the crack of dawn and claiming their own little piece of paradise.

In wildly popular Spain, the problem is particularly intense.

But authorities in Torrox in southern Spain’s Malaga province last year decided enough was enough, writing up new by-laws that allow for fines of up to €600 for people who commit the sin of 'pre-booking' a patch of sand.

Dedicated local police now patrol beaches in the early morning, keeping an eye out for suspect beach settings. When they see a suspect towel or umbrella, they wait a few minutes to see if owners are nearby.

If, however, police deem the site is the work of cheeky ‘beach thief’, police confiscate the material. Owners can then reclaim it — for a fee of €30.

In 2014, a dozen such sets of beach material were removed from the beach. This year to date, the number is 30.

Fines are yet to be imposed on offenders as a new softer-touch local council has been voted in since they were imposed. However, the new council is busy with a campaign designed to inform people about everything from how to deal with jellyfish bites to what to do in the event of finding a lost child.