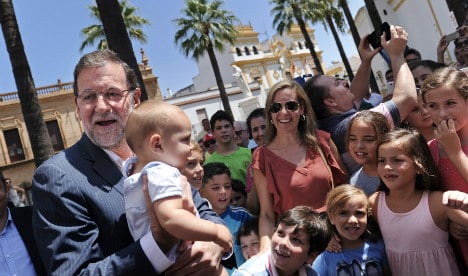 Mariano Rajoy holds a baby as he arrives at the town hall of the southern Spanish village of La Palma del Condado, in Huelva province. Photo: Cristina Quicler / AFP

“These are important elections and I want to say to everyone that they should vote,” the Spanish prime minister told a news conference near Huelva in southwestern Spain where he is on holidays.

“Voting is necessary because there are parties, such as the one which I head, that want this elections to put… an end to the divisions and confrontations that some have tried to create among Catalans,” he said on Tuesday.

Catalan president Artur Mas signed a decree on Monday calling early parliamentary elections on September 27 in the region, which is home to 7.5 million people and accounts for a fifth of Spain's output.

Mas, who already faces criminal charges for staging a mock independence referendum in November despite objections from the central government, has said that if pro-secession parties win a majority, they will aim to split from Spain within 18 months.

Supporters of Catalan independence accuse Rajoy's Popular Party of blocking Catalonia's aspirations for greater autonomy and even of having reduced its autonomy since it came to power in 2011.

“We are acting in self-defence in the face of systematic attacks by the government,” Mas told a news conference earlier on Tuesday in Barcelona.

Rajoy repeated his argument that “no one will break the unity of Spain”,

“No one will turn Catalans into foreigners in their own country. The State and the government will not leave them defenceless,” he added.

Polls show that more Catalans oppose independence than are in favour of it but pro-union parties are much more divided than their pro-independence counterparts.

Catalonia's three pro-independence parties could capture 68 to 72 seats in the region's 135-seat parliament, a slim majority, according to a poll published July 12 in Catalan daily La Vanguardia.