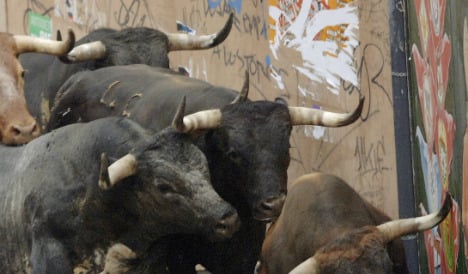 A man was gored to death during a running of the bulls festival. Archive photo: AFP

The man named as Miguel Sirerol was behind a barrier watching the bous al carrer fiesta in the Costa Blanca town of Gata de Gorgos on Monday night.

The victim was treated at the scene by paramedics but died on the way to hospital, according to Spanish news agency Efe.

Although some daredevils choose to run in front of the bulls as they are released into the streets, the victim was a spectator watching the festivities from behind barriers erected throughout the town.

However, a bull charged against the bars and his horn caught the elderly man, ripping open his chest.

A statement from town hall authorities was posted on the community’s Facebook page.

“We want to express our condolences to the family of Miguel Sirerol, who lost his life during the celebration of bous al carrer,” the statement said.

It added that the bullrunning had been suspended for the duration of the fiesta.

It is the second death during a ‘bous al carrer’ fiesta in the Marina Alta region this summer. In July, a 45-year-old Frenchman was gored to death in nearby  Pedreguer.

In June two other men were gored to death by bulls during fiestas to celebrate the summer solstice and San Juan.