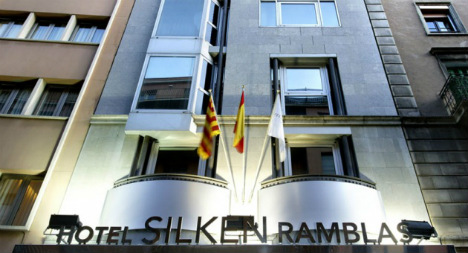 Investigators intially identified the man shot in the stomach by a masked gunman outside the Silken hotel on Tuesday as a Belgian national.

But it emerged that the passport was false and the victim was infact Jori Sven van Zanten, 26, who is wanted by Dutch police for firearms offences and being a member of an outlawed biker gang.

He has been on an Interpol wanted list since April for an October shooting when he and another member of the illegal No Surrender biker gang allegedly staged an attack at a villa in Medoclaan near Eindhoven in the south of the Netherlands.

Police believe that the motive for the Barcelona shooting may have been a settling of scores but they have yet to find the masked gunman who calmly fled the scene after firing two shots.

An unnamed British man was also injured during the attack, sustaining cuts from broken glass when he fell through the glass front of the hotel during the shooting.

The pair had been standing outside the hotel just off the bustling tourist street of Las Ramblas when a man wearing a balaclava approached and fired two shots.

The two men then sought refuge from the attacker by running into the hotel and out of the fire escape. The Dutch man then collapsed in a nearby souvenir shop.