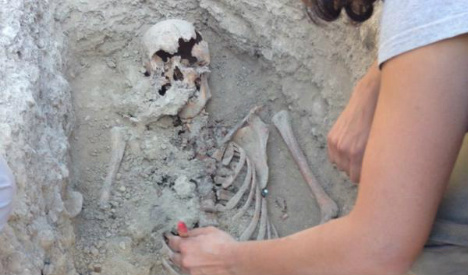 The remains of the Republican soldier were found thanks to the memories of a man who was 10 years old at the time of the murder. Photo: Governació. Gencat/Twitter

The remains of a Republican soldier murdered by Francoist forces in 1939 have finally been discovered almost eight decades later thanks to the memory of a local man who witnessed the incident as a 10-year-old boy.

The man – now 86-years-old – witnessed the burial of the Republican soldier by Francoist forces when he was only 10 years old, during the period of Francoist occupation of the town.

The skeleton of the soldier was found intact in the area indicated by the man, a resident of the town of Torelló, near Barcelona. His memories corresponded exactly with the historical documentation kept by the town hall on the occupation during the Spanish Civil War.

It is thought the Republican soldier was executed on February 4th 1939 and was buried just outside the town.

Experts are currently waiting for an anthropological analysis on the remains, but have revealed that the man was between 25 and 30 years old and 1.7 metres tall.

The archeologists who carried out the excavation noticed cranial fractures which could lead them to establish the exact cause of death of the man, revealed the Catalan regional government’s department of governance, the body responsible for implementing Spain’s Historical Memory law.

The law, which was passed in 2007, formally condemned the regime of General Francisco Franco. Other provisions of the law included the removal of Francoist symbols from public places and state help in locating and exhuming the bodies of the victims of Francoist repression who still remain missing.

Several of Spain's new left-wing mayors have vowed to rid the country's cities once and for all of Francoist symbols.

The excavation also found several buttons and bits of material that could help investigators identify the military uniform of the murdered man in the hope that it might reveal clues to his identity.

While the man is currently unidentified, the director general of the Catalan government's Institutional Realations, Miquel Puig, told Spanish daily, El Periódico, that, thanks to the data researchers have collected, “it is possible that the man will be identified”.