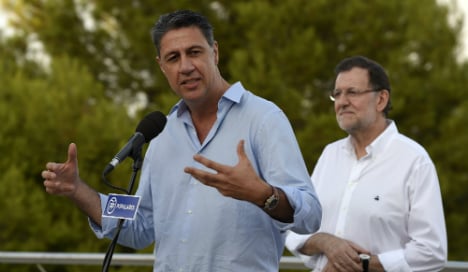 The prime minister said he was “proud” of the decision to nominate Xavier Garcia Albiol, a former basketball player and long-time member of the ruling conservative Popular Party, as its candidate in September's elections.

“Of all the candidates he is the one who best knows people's problems,” he told a party meeting in Castelldefels in Catalonia, just hours after Albiol was officially named candidate.

His opponents and civil society groups have branded him xenophobic for his harsh line against immigrants.

In 2011 he campaigned for mayor with posters bearing the slogan “Cleaning up Badalona” and reportedly claimed it was a reference to municipal cleaning services, but critics said it evoked his previous comments about Romanians and gypsies, whom he has branded delinquents.

The campaign group SOS Racism branded him racist for his line on immigrants.

Roughly 13.5 percent of Badalona's population of 220,000 people are foreigners, mainly from Morocco, Pakistan and Latin America.

In an editorial, top-selling newspaper El Pais blasted the Popular Party for chosing an “extremist” as its top candidate for the wealthy northeastern region, calling it “very bad news”.

An alliance of pro-separatist parties want the regional vote to serve as a proxy independence referendum by running on a joint ticket.

Albiol said the upcoming elections would be “the most important in history” during an interview with radio station Cadena Ser on Tuesday.

“Our project comes from the heart. It goes beyond politics. It is for all those who feel very Catalan but also very Spanish,” he told reporters on Wednesday.

The Popular Party has just 2.4 percent of the regional vote, according to a Catalan government poll released on July 3rd.

But no party scored more than 14 percent and the local political landscape appears very fragmented, with no single party towering over the others.

The Opinion Studies Centre poll also found that 50 percent of eligible voters would vote against Catalonia becoming independent from Spain, while 42.9 percent are in favour.