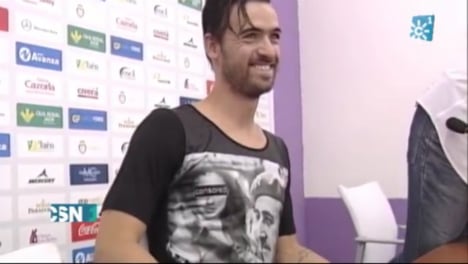 Portuguese footballer Nuno Silva has caused a stir by wearing a Franco T-shirt during his first press conference for a Spanish team. Screen shot: ElDiaDespues12Plus/YouTube

He might play on the right-wing but Portuguese signing Nuno Silva got into a right-wing controversy of a different kind on Wednesday when he wore a T-shirt bearing the face of General Francisco Franco, who ruled Spain with an iron fist from 1939 – 1975.

“We were chatting beforehand, signing the contract, and no one realized. It was our fault for not preventing him from going into the press conference wearing the T-shirt. The lad didn’t have a clue who he was,” the football club’s president, Rafael Teruel Lara, said in a statement.

This is Nuno Silva at his presentation for Real Jaen. And yes, he wears a Franco shirt. pic.twitter.com/LREOwLDbZP

While some areas of the Spanish press blamed the incident on the second division team’s lack of good PR, others were outraged that a footballer would wear a t-shirt emblazoned with the face of the country’s former dictator.

Then there was the more right of centre press who took issue over something entirely different:

“Francoists should be the ones who are really outraged,” wrote daily newspaper ABC.

Nuno who has moved to Real Jaén from CD Santa Clara in Portugal, took to the team’s Facebook page to issue a public apology:

“Today was my presentation as a new player at Real Jaen CF in the press room of La Victoria,”  the player wrote.

“Given the controversy over my shirt, I wanted to clarify that I acquired it a long time ago in Portugal and never knew the impact this historical figure has to part of Spanish society.

“I lived in Portugal and Angola and I don't know the bulk of Spanish history, so was completely unaware of the significance of wearing that shirt in your country,” he continued.

“I want to apologize to all those who have felt offended or who have been shocked. At no time have I have tried to make excuses for the ideologies professed by this person. I do not have any political preferences.”