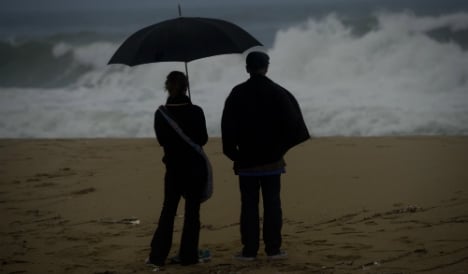 The front of warm air that has been suffocating Spain for the past few weeks is finally moving on, to be replaced this week with a cold front that will see storms and a sharp decrease in temperatures of up to six degrees across the country.

Lower intensity storms are forecast in the top half of the country, as well as in the interior south east.

Aemet is forecasting that the stormy weather will last at least until Saturday August 1st. Much of northern and eastern Spain is on alert for heavy rain and storms. Photo: Aemet

While the cooler weather will come as a welcome respite to many Spanish residents, who have been suffering for weeks under high temperatures, it may also make it harder to witness Friday night’s “blue moon” – a phenomenon that occurs only once every three years.

It occurs when a second full moon appears within the space of one month. The first full moon of the month appeared on July 2nd, while the second will occur on July 31st – this Friday.

But don't worry if you miss it, despite the name it will appear like any other moon, a milky grey. Nasa explains the phenonemon here: