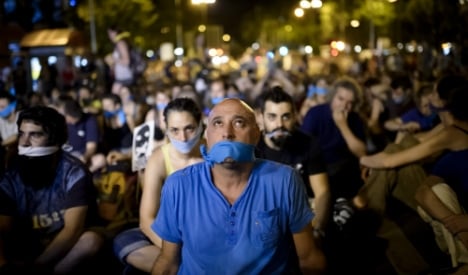 The controversial new Citizen Security Law – dubbed the 'gag law' by critics –  came into force on the first of July and one young Spaniard has already fallen foul of it.

Eduardo made the comments on the Facebook page of the Popular Party mayor of Güímar, Carmen Luisa Dorta. He is a member of a Facebook group where, along with friends he posts satirical criticisms of the local town council, according to Spanish daily, El País.

He made three comments on Facebook. In the first, criticizing the money spent on police facilities in the town, he said: “the Gúímar police, who rescue pigeons and people trapped in their bathrooms (ha ha) will have even bigger facilities than the Civil Guard. What pros!”

In the second comment, he asked whether an investigation was needed after local authorities changed the purpose of a public building in the town.

In the third comment he referred to local police as a “class of slackers” saying that they might as well have their own little kiosks with cocktails, “a hammock and a swimming pool”.

Eduardo made the comments on the morning of Wednesday, July 22nd. That evening, two police officers knocked on his door and presented him with an official complaint for “making comments on social media that showed a lack of respect and consideration for Güímar’s local police”.

Eduardo told El País that he had been an enormous surprise to receive a visit from the police, and his lawyer was now dealing with the incident. He said it was “madness” that he was being penalized for making “humourous comments”. A protester against Spain's “gag law” in Madrid. Photo: AFP

The “gag law” has come under fire for harking back to the days of Franco, in limiting free speech and the right to peacefully protest. The United Nations and Council of Europe have warned Spain against the sending back of immigrants who cross into the north African Spanish enclaves of Ceuta and Melilla.

In another case of Spain’s new gag law coming into effect, the national police have imposed the first fines on prostitutes, handing out a fine of €600 each to a group of prostitutes in Madrid according to the blog, Más solas que nunca.

They are the first sex workers to be fined under the strict new law, which prohibits “the carrying out of acts which threaten sexual freedom, or acts of extreme exhibitionism”.

The €600 fine is the highest that police can impose for “mild crimes” and has been criticized by groups committed to fighting against sexual exploitation such as APRAMP, who tweeted “Sanctions like these are a step backwards in the fight against sex trafficking.”