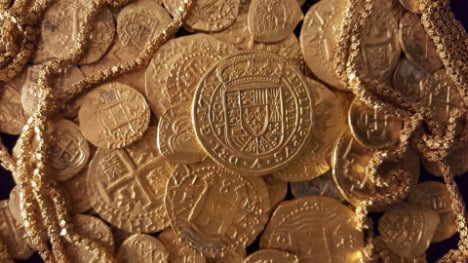 The find includes 51 gold coins and 12 meters (40ft) of ornate gold chain,  which were recovered exactly 300 years after a fleet of 11 galleons sailing from Havana to Spain sank during a hurricane.

More than 1,000 people drowned and the treasures, listed on the convoy’s manifests and valued at $400m in today’s money, were lost to the ocean floor.

The amazing find was announced by Brent Brisben, the owner of the 1715 Fleet – Queens Jewels LLC salvage company which bought the rights to the wreck in 2010.

But it was made by Eric Schmitt who was diving near Fort Pierce during his yearly treasure-hunting trip with his wife, his sister and his parents on the family salvage vessel named ‘Aarrr Booty’, according to a report in the Orlando Sentinel.

It was the third discovery made in the area by the Schmitts who subcontract the right to treasure the wreck site from Brisben’s company.

Although they have yet to make a public statement about their latest discovery, speaking after their first find Hillary Schmitt told JCKonline: “We never expected to get rich off this. We do it for the love that we have for treasure hunting, for finding part of history.”

The centrepiece of the Schmitts’ latest find is a perfect specimen of a coin called a royal, made for Spain’s King Phillip V and dated 1715.

Only about six of the coins are known to exist.

“It's incredibly rare and incredibly valuable,” Brisben told the Orlando Sentinel. “It returned from the depths on its 300th birthday.”

Under US federal and Florida state law, 20 percent of the find will go for display in a state museum, while the remainder will be split between Brisben’s company and the Schmitt family.