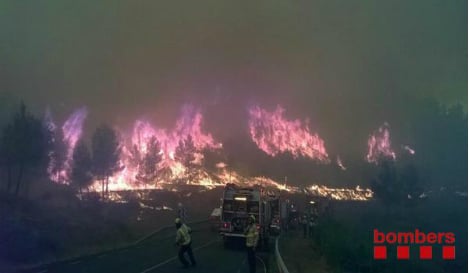 A forest fire is still out of control in Ódena, near Barcelona. Photo: Bombers. Generalitat/Twitter

Over 800 people were evacuated from the villages of Ca l’Esteve, El Bosc Gran and Monserrat Parc in Ódena near Barcelona, after wildfires broke out over the weekend.

At least 1,000 hectares of vegetation have been destroyed by the fire, which broke out on Sunday afternoon. While the fire continues to rage, firefighters have stabilized the perimeter ensuring the flames did not expand further overnight, according to the Spanish Huffington Post.

The evacuated residents were spread out over neighbouring villages, where they souht refuge overnight in a basketball arena and a library, quickly set up to accommodate them.

To make matters worse, firefighters from Spain’s forest firefighting service (BRIF) began an indefinite strike on Monday in protest against working conditions and low pay. It is the first time such a strike has taken place while wildfires sweep vast areas of Spain, the association of forest firefighters, Atbrif, said in a statement on its website.

“Is it fair that we make such a ridiculously paltry amount while we put our lives at risk?” the firefighters' association said.

The association is meeting with representatives from the Ministry of Agriculture, Food and Environment in Madrid on Monday.

There are currently 127 fire engines and three aeroplanes working to put out the flames near Barcelona, according to a statement released early on Monday morning by Catalonia’s Fire Brigade.

Two fires began in the towns of Navia de Suarna and Folgoso do Courel on Saturday afternoon and are still active as firefighters battle to get the flames under control.

In Navia, the fire was so severe that around 50 soldiers from the Spanish army’s Military Emergencies Unit were called to the area.

On Sunday 35 teams were working to control the blaze, using 19 water pumps, while ecologists were said to be “devastated” by the damage caused by the fire to the local environment.

The valley in which the fire is raging is home to some of Spain’s endangered population of brown bears.