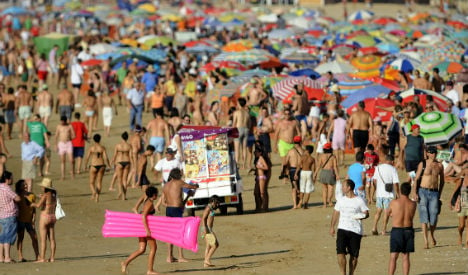 Tourists are flocking to Spain in greater numbers than ever before. Photo: AFP

But of the nearly 30 million visitors to Spain during the first six months of the year more and more are shunning stays in hotels and are instead choosing private rentals through websites such as Airbnb.

Brits led the hoards of holidaymakers flocking to Spain this year making up 23 percent of the 29.2 million foreign visitors to its shores, a 4.1 percent rise in total visitors from the same period last year.

Tourism is fueling Spain’s economic recovery according to the figures released on Wednesday by Frontur, the statistics agency linked to Spain’s Ministry of industry, trade and tourism.


The graph shows the number of tourists to visit Spain by month between 2011 and 2015. Source: Frontur

Visitors are flocking to Spain in greater numbers than ever before, thanks in part to security fears in other parts of the Mediterranean, such as Tunisia, where last month a gunman opened fire on a beach killing dozens of tourists.

The instability caused by Greece’s debt crisis and migrant influx into Italy have also added to many tourists choosing Spain as a safe sunny alternative.

Add to that the weak euro, which has helped attract more visitors from the United States as well as proving an extra draw to British holidaymakers.

The figures show that Brits remained the top visitors to the country, counting for almost a quarter of all foreign visitors to Spain during the first six months of the year.


Percentage of foreign tourists by nationality to visit Spain during June, 2015. Source: Frontur

In June alone more than a fifth more American tourists visited Spain than in the same month a year earlier. But currency fluctuations also had the effect of driving away Russian tourists. The figures showed that 46.5 percent less poeple from Russia visited Spain in June than a year previously.


The graph shows the number and nationality of tourists compared to a year earlier. Source: Frontur

But Exceltur, the industry lobby group reports that although the number of foreign visitors is on the rise, their spending per head was dropping.

Spain has experienced a backlash against mass tourism with residents complaining of disruptive behaviour from low budget tourists.

Magaluf is among those resorts attempting to clean up its image with a raft of new bylaws prohibiting exhibitionism and binge drinking.

Meanwhile, in Barcelona the new mayor has vowed to introduce measures to limit the number of tourists to the Catalan capital.

Authorities have already announced a clampdown on the rental of private homes to tourists including through such popular sites as Airbnb.

The new figures showed that in the last six months the number of tourist staying in private homes had risen by an estimated 8.7 percent on a year earlier.