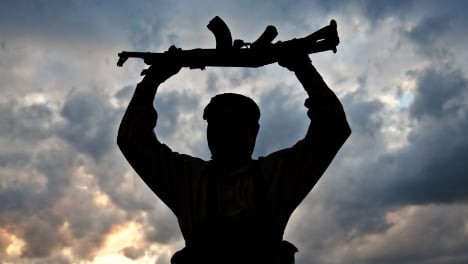 The man was expelled from the Spanish army eight years ago for drugs offences and for stealing military explosives, Spanish daily El País reported.

Spanish police working with Moroccan security services seized the man overnight as part of a major investigation into gangs suspected of recruiting women and minors to send them to Syria and Iraq.

They arrested a 29-year-old man from Melilla, a small fenced-off city on the tip of northern Morocco, the interior ministry said in a statement.

It said he possessed “multimedia files of a jihadist nature”.

“Some of his propaganda and indoctrination material was aimed specially at radicalizing women.”

It said officers also seized recordings of “radical sermons” in favour of the Isis group.

The suspect is accused of sharing the material with his son, a minor, “to familiarize him with jihadist tactics”.

He was transferred to mainland Spain to face charges, the Interior Ministry announced in a tweet.

Isis has claimed numerous killings and kidnappings in Iraq and Syria, where in June 2014 it declared an “Islamic Caliphate” in territory under its control.

Melilla is one of two Spanish territories bordering Morocco, along with Ceuta to the west.

They have Europe's only land borders with Africa, posing a security concern to Spanish authorities.

Spain has been cracking down on suspected jihadists over the past year, arresting scores of people, mostly in Melilla, Ceuta and the northeastern mainland region of Catalonia.

The government says at least 116 Spaniards have left to join jihadist groups in Syria and Iraq, according to a figure dating to July 6th.

Authorities say hundreds of other jihadist recruits from countries such as Britain, France and Germany are thought to have headed the same way.