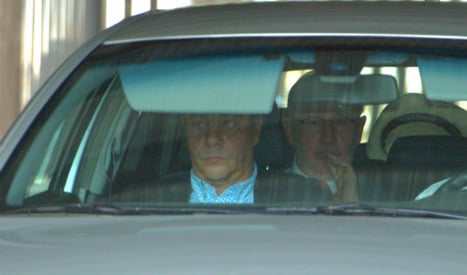 Rodrigo Rato in a car as he leaves the court on Wednesday. Photo: AFp

One of the best-known politicians in Spain, Rato was summoned before a Madrid judge investigating allegations including tax fraud and money-laundering.

A source present at the hearing said that Rato told the court: “My right to a defence obliges me not to answer your questions because I am unaware of the deeds of which I am accused” and the grounds for the charges.

He said he would not speak out in court until he had seen a report being drawn up by the fiscal authorities, based on documents seized during searches of his home and offices in April.

Rato, 66, was formerly a prominent member of Spain's governing Popular Party. He was Spain's finance minister in the late 1990s and managing director of the IMF from 2004 to 2007.

The investigating judge summoned him for a hearing to decide whether to bring formal charges against him over the latest allegations that erupted in April.

This probe centres on allegations of tax evasion, money-laundering and concealing assets.

Rato was already being investigated for alleged fraud during his time as chief executive at Bankia, a Spanish lender which needed to be bailed out by the government in 2012.

Rato has also been questioned in court as part of a third probe into alleged spending sprees on company credit cards by him and other ex-managers of Bankia.

He has denied wrongdoing in both those cases.