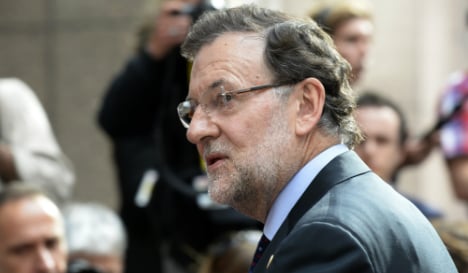 Spanish Prime Minister Mariano Rajoy has said "no theory is being ruled out" about what has happened to three Spanish journalists, missing in Syria. Photo: AFP

“No theory is being ruled out. The only thing we know for sure is that they have disappeared,” he said in comments quoted by Spanish news agencies and confirmed by a source in his office.

Foreign Minister José Manuel García-Margallo said Spanish intelligence agents were working urgently to track down the journalists, the latest of numerous foreigners to go missing while reporting in Syria.

Jose Manuel Lopez, Antonio Pampliega and Angel Sastre have been missing for 10 days in a war zone where numerous foreigners have been kidnapped in the past, the Spanish press federation FAPE said.

They were reporting in Aleppo, a city in northwestern Syria that has been devastated by fighting.

Officials could not yet confirm whether the men had been kidnapped.

“No demands have been made so far” by any would be captors, said García-Margallo.

Media rights group Reporters Without Borders ranks Syria as the most dangerous country in the world for journalists.

It says at least 44 journalists have been killed since the conflict broke out in 2011 in Syria, where various armed factions are battling President Bashar Al-Assad's regime and each other.