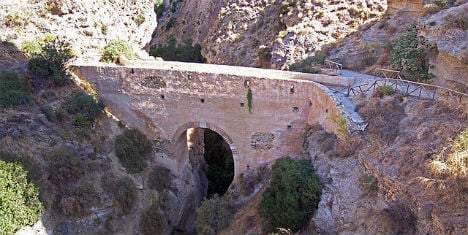 The 23-year-old from London, named in the British press as Kleyo de Abreu, died after slamming into a bridge during the daredevil jump.

She was jumping at a well-known bungee spot outside Lanjarón in the Alpujarras south of Granada on Tuesday afternoon with a local company that organizes adventure sports.

A spokesman from the Guardia Civil told The Local: “She did one jump and loved it so wanted to do a second, but for some reason that we don’t understand, the cord was too long on her second attempt.”

“Either something happened during the bungee fall or there was a miscalculation but it was her second jump of the day so it seems strange,” the spokesman told The Local.

“She slammed into the old bridge below the new bridge where the jumping point is and she would have been killed on impact,” he said.

The body of the woman was left hanging on the bungee cord until a specialist team of rescuers arrived at the scene.

The woman was on holiday with her Spanish aunt who had accompanied her to the bungee jump site and witnessed the accident just before 3pm.

“Unfortunately the aunt saw the whole thing,” confirmed the Civil Guard. “It would have been terrible for her but she is alright and didn’t need hospital treatment.”

There are several companies that operate bungee jumps from the bridge. “It is a company that regularly organizes such activities and this is the first incident of its kind,” confirmed the Civil Guard.

“An investigation has been launched by the Judicial Police,” he added.

Bungee jumps can be arranged for €35 and usually include a video of the experience with the option to have a second jump on the same day for just €15.

The jumps take place over a 250 ft ravine above the old Puente de Tablate where thrill seekers dive backwardsand freefall 60 ft until the bungee cord stops their fall and they come springing back up again.

The site is near the town of Lanjarón in the foothills of the Sierra Nevada about an hour’s drive south of Granada.