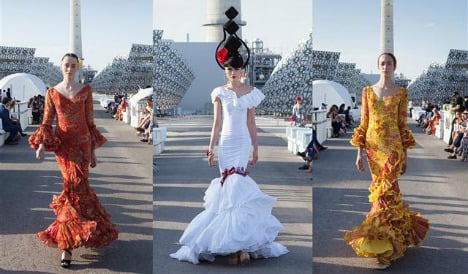 The fashion show was the brainchild of British-Vietnamese model and entrepreneur Jessica Minh Anh, who hosted the J Summer Fashion Show at the futuristic Gemasolar solar power plant outside Seville on Friday.

Minh Anh is renowned for her breathtaking fashion shows and has previously constructed runways at the Eiffel Tower, the Grand Canyon and London’s Tower Bridge – Friday’s show marked her most eco-friendly yet.

The catwalk was set up right at the centre of the power plant – which boasts technology to produce 24hr electricity using the power of the sun – while drones flew overhead to capture exclusive angles of the fashion show.

There was a last minute disaster thanks to an unseasonably wild storm, complete with thunder and lightning, that completely destroyed the backstage area. Minh Anh quickly moved her models, hairdressers and make-up artists to the models' bus, which doubled-up as a snug backstage while they waited for the storm to pass.

The first collection of the day took its inspiration from Seville’s rich flamenco heritage; Minh Anh led the models onto the stage wearing a red flamenco dress designed by Seville native, Pilar Vera. Other designers to feature in the show included Beijing-based Spanish designer, Paloma Sánchez, who showcased her jewellery, a fusion of Chinese and European influences, and Vietnamese designer Hoang Hai.

Plant manager Raul Mendoza Ruiz said: “Gemasolar is an international symbol of the next generation of power plants and represents the future, just as Jessica does in fashion.”