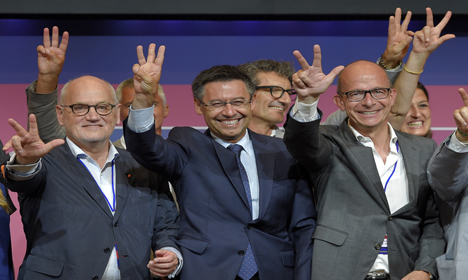 Bartomeu, who took over as president early last year after his predecessor Sandro Rosell stepped down, will lead Barcelona for the next six years.

Barcelona, just like their great rivals Real Madrid but in contrast to other leading European clubs, are owned by their members — of whom there are more than 150,000 in total — and elections are usually held every six years.

However, this election was called a year early by Bartomeu at a time when tensions inside the club were running high because of poor relations between Barça coach Luis Enrique and star player Lionel Messi — something that was remedied in dramatic fashion when they won the treble of Champions League, La Liga and Copa del Rey in the spring.

The team's success on the field and the club's success off it, with Barcelona returning a record profit of 608 million euros ($650 million), meant Bartomeu was the favourite to beat the challenge of Laporta.

“We must continue to be the number one club and these six years are very important,” Bartomeu said after casting his vote on Saturday morning.

Laporta was in charge from 2003-10 and it was to his credit that he appointed Pep Guardiola in the coaching job in 2008 — a decision which sparked a trophy-laden spell of success — although his financial record has been criticised.

Laporta attacked Bartomeu for standing despite facing criminal charges along with Rosell.

Rosell, a former ally of Laporta's before the two fell out in 2005, resigned last year when investigations began into alleged misappropriation of funds in the signing of Brazilian star Neymar from Santos.

Bartomeu, who had been the vice-president, stepped up to replace Rosell but in May a court ordered him to stand trial along with the club in the Neymar case.

Laporta, 53, also criticised Bartomeu's more nuanced stand on Catalan independence, which is in stark contrast to his own position.

He has spent the past eight years dabbling in politics, and said he wants Barça to return to the “values” of his previous term in office, with an emphasis on bringing through players from La Masia, the club's renowned youth academy, and bringing back the Unicef logo on team shirts.

He also said that he would look to sign French international midfielder Paul Pogba from Juventus — he is also a reported target of English side Manchester City.

Barcelona are currently serving a FIFA-imposed transfer ban that means any new signings cannot play for the club until 2016.