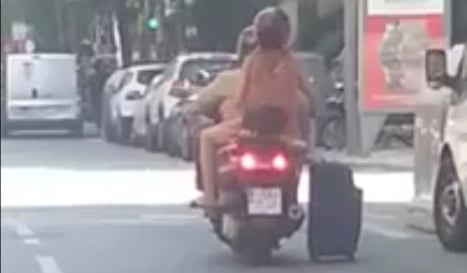 The couple were filmed pulling suitcase alongside scooter. Screengrab: c3000u/YouTube

One Barcelona couple seem to have figured out how to get around the problem of transporting a suitcase on a scooter: just drag it alongside as you weave through rush hour traffic.

“Maleting” (from the Spanish word for suitcase: maleta) i.e. pulling along a suitcase while on a motorbike or scooter, first hit the headlines in Spain during the summer of 2014.

A couple of motorists in Mallorca went viral after they were filmed pulling a small suitcase along a motorway.

When they noticed they were being filmed they gave a thumbs up, all the while gripping onto the handle of the suitcase that sped in their wake.

It is not the first word to which Spaniards have added the English -ing to describe risky behaviour, often carried out by tourists.

“Balconing” is the word Spaniards coined to describe the practice of tourists – often drunk or on drugs – jumping from one balcony to another or into swimming pools below. The dangerous activity has already led to several deaths and serious injuries in Spain.

“Mamading” (sucking) was another -ing word coined by Spaniards to describe controversial tourist behaviour, this time in reference to a bar in the Mallorcan resort of Magaluf that was offering free drinks to the woman who could perform the most felatio in the shortest time.

The bar was closed and fined after the incident – involving a young British woman – which hit international headlines and received condemnation in Spain.