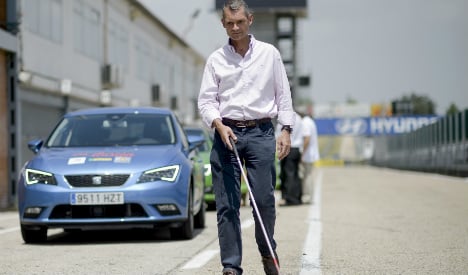 A blind man at the racetrack during the event in Jarama. Photo: Dani Pozo / AFP

“It was a terrific experience. We got up to 92 kilometres (57 miles) per hour,” said Jorge Macauda, 53, after taking a spin, accompanied by an instructor, on the Jarama racetrack near Madrid.

Macauda is totally blind having gradually lost his sight as an adult.

The rally was organised by ONCE, a big and influential Spanish charity for the blind, along with carmaker Seat and the Spanish Royal Automobile Club.

They said it was the first such activity for the blind held in Spain.Similar drives have been held elsewhere, including ones in the United States with cars developed by Google.

“We are not telling the blind that they are going to start driving again,” an ONCE spokesman said.

“What we are doing is trying to integrate them as much as possible in society, to help them feel independent.”

About 60 blind drivers did two laps each of the circuit in cars equipped with emergency automatic braking and speed-control systems, with professional copilots telling them when to steer.

“You really have to concentrate. The copilot talks you through it and tells you when there's a sharp bend,” Macauda, who works for ONCE, told AFP. 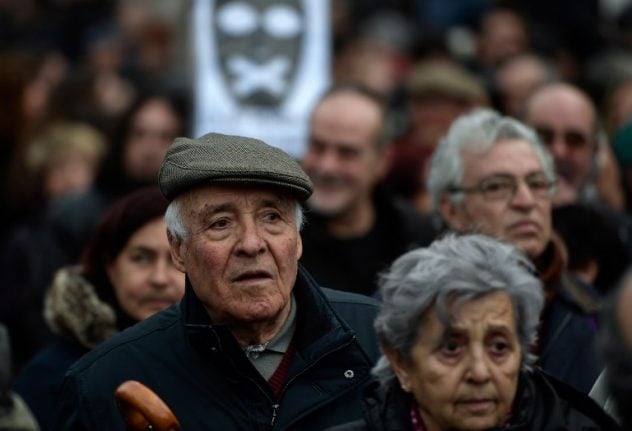 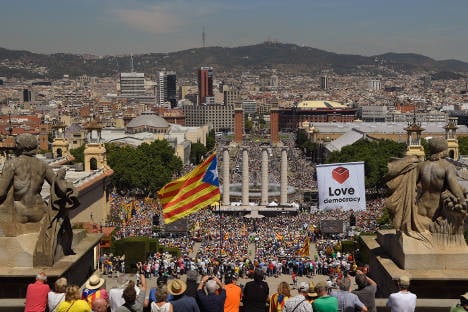 The unrest among the elderly is of concern to the PM's Popular Party, which traditionally enjoys their support. PHOTO: OSCAR DEL POZO / AFP
Pensioners braved rain and snow showers as they poured onto the streets of the capital Madrid and second city Barcelona from mid-morning to vent their ire at conservative Prime Minister Mariano Rajoy.
“Rajoy, thief, you are stealing my pension,” read one placard, while other slogans accused the government of wantonly ramping down pension benefits.
“The least well off classes are suffering a loss in purchasing power,” one pensioner two years into retirement, Emilio Zamora, told AFP as he brandished a banner reading “no bread, no peace.”
“It's getting worse,” said Mari Carmen Calvo, a hairdresser aged 70 attending the fourth such rally in barely six months alongside her husband.
Pensioners are fuming after seeing their benefits rise by an annual 0.25 in recent years, well below an official inflation rate of 1.2 percent as of late 2017.
The unrest among the elderly is of concern to Rajoy's Popular Party, which traditionally enjoys their support.
Spain's largest trade union the CCOO has accused the government of “favouring private pension to the detriment” of the state equivalent.
Heading a minority administration as his party looks to put together a budget in the coming weeks, Rajoy pledged in midweek to target modest increases for the most modest pensions although he has been encouraging Spaniards to invest in private plans. Rajoy says Spaniards will have to wait until the budget shake-up before the government can look to deliver “possible improvements” as he concentrates on delivering jobs growth.
The government maintains it has to try to balance the books somehow to stay within EU spending guidelines even as the population ages with Spain having one of Europe's lowest birthrates. Demographic trends mean the past decade has seen pensions rise from accounting for 21.6 percent of state spending to 29 percent.
According to Eurostat data, 28.7 percent of residents of EU states will be aged over 65 by 2080, up from 18.9 percent in 2015. 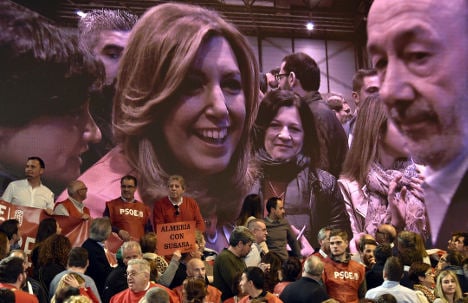 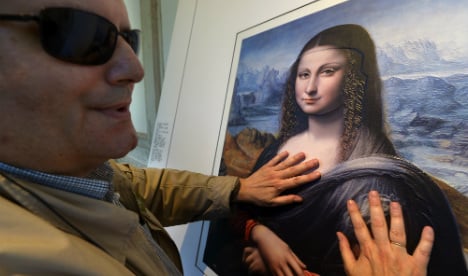