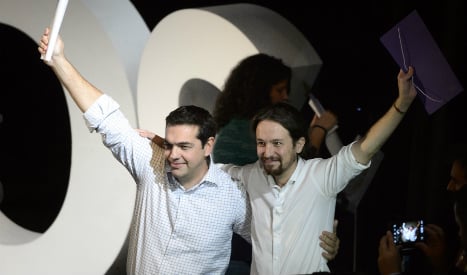 Alexis Tsipras made the comments while appearing on Greek public television for the first time since reaching an agreement with European creditors on a third bailout deal.

While Podemos has been critical of the deal, the Spanish protest party, which is polling strongly ahead of a general election due at the end of the year, has been careful to distinguish itself from its Greek ally.

The party insisted Spain would not go the way of Greece if Podemos took power.

He said Monday's deal for Greece, despite offering stability, was “not a good agreement” because it went against the will of Greeks who voted against more austerity reforms in a referendum.

Created only a year and a half ago, Podemos has surged in popularity and is running third in polls.

The ruling Popular Party says that if Podemos forces a change of course on the economy after the election, Spain could plunge back into crisis.

Álvarez insisted that unlike Greece, “Spain at this time has enough room” to apply its pro-growth policies and to reduce the  budget deficit gradually.

The government aims in 2016 to bring the deficit under the level of three percent of economic output required by European treaties.

It forecasts the country's public debt will equal 98.5 percent of the economy this year, compared to Greece's debt ratio of more than 177 percent.