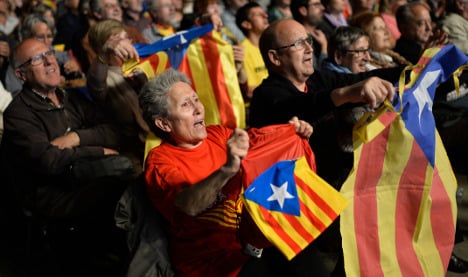 Leaders of the centre-right CDC party and left-wing ERC sealed a pact at a meeting on Tuesday, agreeing to run on a joint ticket on September 27, sources in both parties told AFP.

The parties want the regional election to serve as a de facto referendum by running on a joint ticket, campaigning on the single issue of independence.

They agreed that if they jointly win a majority, they will form a coalition government led by current regional president Artur Mas that will aim to achieve independence within 18 months.

The CDC currently governs Catalonia, a region with numerous pro- and anti-independence parties, but it split in June from its longtime coalition partner UDC in disagreement over the path to sovereignty.

Mas tried to hold a referendum on independence last November but that was blocked by the national courts after the Spanish government appealed against it.

Instead Mas held a symbolic, non-binding vote in which he said a majority of participants backed independence.

A Catalan government poll published on July 3rd indicated that support for independence in Catalonia had slipped from 44.1 to 42.9 percent, with 50 percent of voters opposed to it.