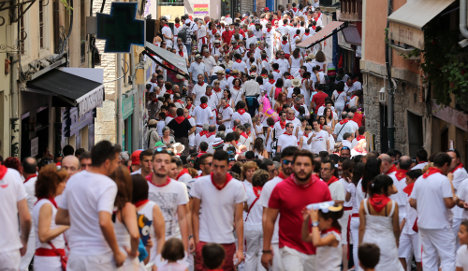 A 19-year-old woman reported being raped at night between July 9th and 10th when she went to the bathroom during the bull-running festival, according to newspaper El Mundo.

According to activist groups, the woman was attacked by one man while his friends stood by, “allowing it to happen and laughing at the situation”.

The assault was stopped when two friends of the woman forced open the door of the bathroom and made the men leave.

Activist groups have planned a demonstration to raise awareness about sexual violence for 8pm on Monday while some local shop owners will observe a half hour of silence starting at midnight, playing no music.

The groups have emphasized that other, less intense, reports of sexual crimes were reported during this year’s fair, but that they had been “denounced socially”.

“We have spent many years supporting these celebrations, sold with the phrase 'in San Fermin, anything goes'. As we listen carefully, in San Fermin and like any other party, not everything goes. When a woman says ‘no’, that means no, regardless of the condition she is in and what the situation is,” said activist groups La Plataforma de Mujeres contra la Violencia Sexista and collective Gora Iruñea in a statement.

Last year was the first time in the history of the centuries-old fair that a special police force focused specifically on preventing sexual assaults was tasked with patrolling the festival.

The festival will still be running during the protest with the last events scheduled for Tuesday.