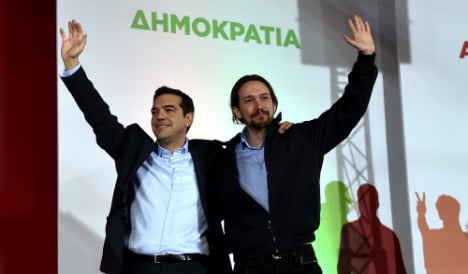 “What they are trying to do in Greece is launch a financial coup d'Etat and convert it into a protectorate,” said Pablo Echenique, a former member of the European Parliament and now a regional deputy.

Speaking in a television interview, he was the first prominent member of Podemos to react publicly to the deal announced in Brussels, which obliges Greece to make tough cash-saving reforms.

Podemos is a high-profile ally of Syriza, sharing its stance un opposing the financial cuts imposed in the financial crisis under pressure from European authorities.

Podemos has surged in popularity and ranks as the third biggest party in Spain ahead of a general election due around the end of the year.

While Podemos criticized Greece's deal with eurozone creditors, Spanish Prime Minister Mariano Rajoy hailed the deal on Monday as a “balanced agreement” that can help heal Greece's economy and strengthen the eurozone.

“I think it is a balanced agreement,” Rajoy, who has taken a tough line on Athens in its debt talks, told a news conference. “The key now is that everyone do their part and honour their commitments.”