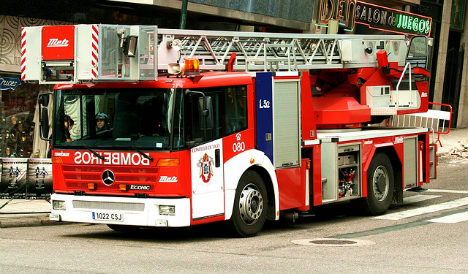 Eight people have been killed in a fire at a retirement home in northern Spain. Photo: Contando Estrelas/AFP

“There are eight dead and 11 hurt, including two seriously from smoke inhalation,” a spokesman for the Aragon region government told AFP.

According to local newspaper El Periódico de Aragón, investigators from Spain's Civil Guard have indicated that the blaze started on a matress in a  bedroom that was located on a vacent floor of the building, where no residents were currently staying.

Investigators are currently trying to determine if the fire was intentional or accidental.

The fire started at around 11.30pm on Saturday, in the private residential home in the town of Santa Fe de Zaragoza.

Seven women and one man died in the blaze, while 12 others were injured, according to El Periódico de Aragón.

Aragon has declared a day of mourning on Monday for the eight victims of the fire.

The area has for more than a week suffered from a heat wave. A fire between July 3rd and 7th saw nearly 14,000 hectares burned in what was the country's worst blaze since 2012.