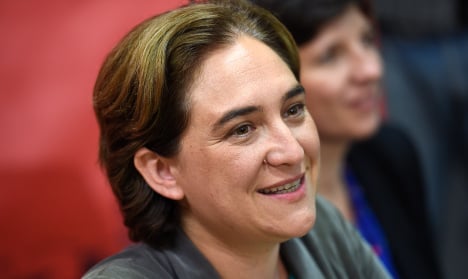 The poll, conducted by Catalan daily La Vanguardia and published on Sunday, showed that 51.4 percent of Catalonians said Colau’s changes will bring in less investment to the city as they say the left-wing mayor's crack-down on tourists is making Barcelona “not a good model for tourism”.

Another 45.9 percent said they believed the city’s brand will get worse.

An activist in the anti-eviction movement, the left-wing Colau took office last month with goals of making waves across the city.

Voters showed their dissatisfaction with major parties by voting in mayors backed by left-wing, anti-austerity party Podemos, a party barely more than a year old that grew out of Spain's indignados (outraged) movement.

One of Colau's focuses has been on the ballooning tourism industry, which locals complain has caused the city to lose its spirit.

Colau’s government has suspended the issuance of new tourist accommodation licenses for a year to review the industry. The city had also previously banned large tourist groups from entering the iconic La Boqueria market.

A poll last week showed a little more than half of Barcelona dwellers felt positively about the new city administration and Colau was the top-rated local politician.

But the Catalonia-wide poll struck a more negative tone, with more than half (50.9 percent) saying that the relationship between Barcelona and the regional Catalan government will worsen under Colau.

Respondents seemed to have a bit more confidence in some of the issues that Colau campaigned on, especially when it came to urban mobility. More than 45 percent said they believed traffic conditions would improve under the new mayor.

At the same time, only 15.8 percent said they thought social aid programmes would improve, an issue which Colau’s council had made a major part of its campaign.