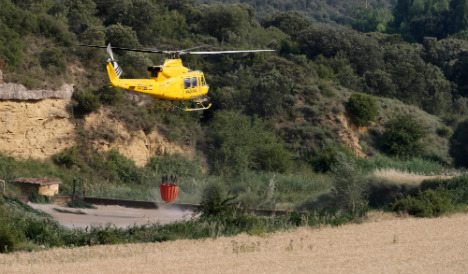 At least 10 major forest fires have broken out in Spain during the heatwave. Photo: Cesar Manso/AFP

At least 10 major blazes have broken out around the country as temperatures reached record levels for July in at least four places.

In the southern city of Granada temperatures topped 43C (109 degrees Fahrenheit) on Tuesday, a level never before reached there in July.

In Zaragoza in the northeast, the state weather agency Aemet recorded a high of 44.5C that day.

Temperatures in many cities topped 40 degrees on Thursday and at least four major wildfires were raging at 1500 GMT, with two of them threatening the Cazorla nature park in Andalucia.

South of the park in Quesada, flames were threatening 1,800 hectares of land, emergency services there said. Another fire was blazing north of the park.

Near Granada, 600 people were temporarily evacuated due to another blaze, officials said.

A fourth fire broke out in Zufre in western Andalucia but was reported to be evolving more favourably.

Firefighters on Monday had brought under control a wildfire near Zaragoza that forced the evacuation of some 1,500 people from their homes and burned 14,400 hectares (35,500 acres) in less than four days.

There had not been a wildfire that big in Spain since 2012. In that year, some 226,000 hectares of forest and brush burned overall.

Environmental group Greenpeace warned in a statement Thursday that “cuts to fire prevention and extinction” budgets in the recent economic crisis, as well as the extremely hot and dry weather, worsen the fire risk.

Aemet said the current heatwave – Spain's second so far this year – could last until July 16th. Most of the country is on extreme fire alert for Friday.