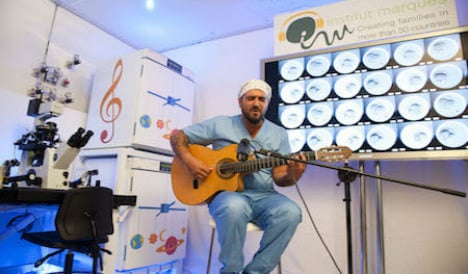 Barcelona native Antonio Orozco is usually suited and booted when he takes to the stage, but this week, the Spanish singer donned some scrubs for a very special concert – in an IVF clinic.

In a world first, the singer – famous throughout Spain and Latin America – played a very intimate gig on Monday for the 380 embryos currently gestating in the Institut Marquès in Barcelona.

Pictured in front of dozens of incubators, the popular Spanish singer strummed his guitar, in support of research the centre is currently undertaking on the positive effects of music on embryonic and fetal development.

“It was a unique experience,” said the singer after serenading the embryos, according to a statement. The research is based on the findings of a paper – “Impact of exposure to music during in Vitro culture on embryo development” – presented by the Institute two years ago at the annual meeting of the European Society for Assisted Reproduction.

The paper showed that musical vibrations increase the success rate of IVF (in vitro ferilization) by 5 percent, as well as improve the development of the embryo.

“That is why we have developed an innovative method to incorporate music in all our embryo incubators,” the Institut Marquès said in a statement on its website.

“With this system, we are moving forward in our efforts to reproduce in a laboratory the natural conditions embryos enjoy in utero in order to improve fertilization rates,” said Doctor Marisa López-Teijón, head of Assisted Reproduction, in the statement.

After what must be the most unique gig of his life, Orozco praised the work of the team at the hospital.

“I think it is marvellous that Doctor López-Teijón and her team are applying this principle to their research and making sure music plays a part in life from the very first day,” the singer said.