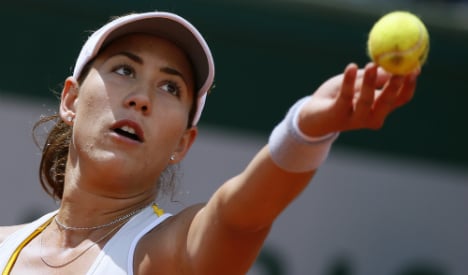 The 21-year-old goes on to tackle either world number one and five-time champion Serena Williams or 2004 winner Maria Sharapova in Saturday's final.

Aranxta Sanchez-Vicario was the last Spanish woman to make the final at the All England Club while Conchita Martinez was the last champion in 1994.

Muguruza had to endure some nervy moments before she secured her maiden Grand Slam final spot, seeing a 3-1 lead in the second disappear against the three-time semi-finalist.

Muguruza, who has only one tour title to her name, then took victory with a power-packed flowing forehand, her 39th winner of the contest.

“I have worked all my life for this, I have no words,” said 20th seed Muguruza who will climb into the top 10 for the first time next week as a result of her performance at Wimbledon.

“It was a tough match. Agnieszka has so much experience but I just wanted to keep fighting.”

Muguruza said she expected her family to fly to London to see Saturday's final having told them to stay away as not to jinx her progress.

“My mother, father and brother will come over – I didn't want them to come before in case things changed,” she said.

Muguruza said she was hoping for the best when Radwanska challenged a ball she believed to be out but replays showed to be on the line.

“I was praying it was on the line,” she said of the challenge which took her to match point.

Had Radwanska not challenged, she would have won the point as the Spaniard had continued playing and hit her next shot out.

“It was 50/50 call on that ball. I decided to challenge. Wasn't really a good decision,” said the Pole.

Muguruza will be the underdog in the final. She trails Sharapova 3-0 and Williams 2-1 although she did defeat the American at the French Open last year.

The Spanish palyer, contesting her first Grand Slam semi-final after back-to-back runs to the French Open quarter-finals in 2014 and 2015, had enjoyed an impressive tournament.

She had knocked out fifth seed Caroline Wozniacki and 10th-seeded Angelique Kerber to make the last four.

That battle-hardeed edge shone through on Centre Court as the 6ft (1.83m) Muguruza unleashed 12 winners to Radwanska's four in the opening set.

Two breaks of serve in the first and fifth games gave her the opener in just 33 minutes with the Pole only managing to claim four points of the Spaniard's serve.

Muguruza broke again in the opening game of the second set and it wasn't until the sixth game that the 26-year-old Radwanska carved out and converted a first break point to level at 3-3.

Radwanska then raced through the second set, having collected five games on the trot.

That became six on the bounce with a break in the first game of the decider before the Spaniard stopped the rot with a break back for 1-1.

In a tense conclusion, Muguruza broke for 4-2, rediscovering the raw power of her earlier dominance and survived being called for two foot faults in the closing stages before she secured a famous win.