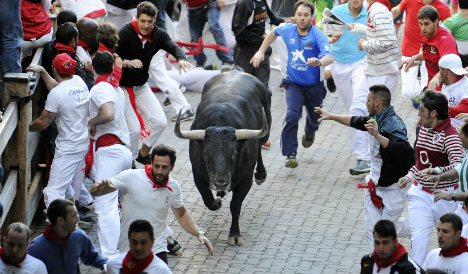 A huge black bull called “Jubilado”, or “Retired”, sped ahead of a pack of six bulls, and charged runners before slipping and falling on a group of daredevils.

An isolated bull is more dangerous because it can become disoriented and more likely to attack.

The survivor's guide to running with the bulls

Runners, many wearing traditional white clothes with red neck scarves, collided into each other or pushed one another out of the way as the galloping animals neared.

“There was a lot of panic this morning. I jumped over six people today,” said Peter Milligan, a 44-year-old lawyer from New Jersey in the United States who took part in the run with his brother and son.

“One of the bulls hit me in the back with its nose and then ran off. The whole time my son was running a couple of steps ahead of me.”

No one was gored but five Spanish men between the ages of 27 and 58 were taken to hospital for injuries to the head, knees or elbows, the regional government of Navarra said in a statement. None of the injuries were serious.

The bulls from the Los Victoriano del Rio ranch near Madrid took just two minutes and 27 seconds to cover the 846.6-metre (925-yard) course from a pen to the city's bull ring, where they will face matadors and certain death in the afternoon.

Just before the herd arrived in the ring one man grabbed the horn of the lead bull, causing other runners to fall. Touching the bulls is forbidden.

It was the third of eight scheduled runs. A 27-year-old Australian man was gored in the groin and thigh in Pamplona bull ring at the end of the second run on Wednesday. Two Americans and a Briton were gored in the first run on Tuesday.

All of the injured were treated in hospital and later released.

“I tripped and fell backward and a bull got me right in the armpit. I got up, noticed a little blood. I looked under my shirt and noticed a hole,” said one of the Americans who was gored on Tuesday, Mike Webster.

The 38-year-old occupational therapist from Gainesville, Florida has been taking part in San Fermin for the past 11 and it was his 38th bull run but he said he would not run again.

“I made an agreement with my wife that if I got injured I would stop and watch,” he said.

Fifteen people have been killed in the bull runs since modern day records started in 1911, most recently in 2009 when a bull gored a 27-year-old Spaniard in the neck, heart and lungs.