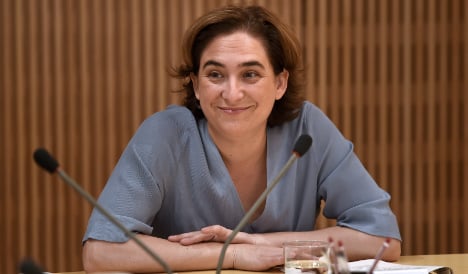 Barcelona's new mayor has given herself a paycut. Photo: Josep Lago/AFP

The salary cut is part of a proposal that Barcelona en Comú has presented to the opposition in City Hall, a proposal which also includes recommendations to cut councillors’ salaries.

While Colau may be taking a pay cut, it is far less than her original suggestion: the party’s ethical code stated that she would earn €2,200 a month, which would average €43,000 a year.

According to Catalan daily La Vanguardia, Colau explained during a press conference that the remainder of her salary will go towards social projects in the city. She has not yet announced to which projects and organizations the rest of her salary will go.

Former mayor Trias, who held the position from 2011 until 2015, often earned over €140,000 when expenses were added in, according to La Vanguardia.

Trias, of the pro-independence Democratic Convergence of Catalonia, was one of the highest paid civil servants in Spain during his time in City Hall.

Colau has also given up her expenses, one in a range of measures she has implemented since taking up the position of mayor.

She has already imposed her first curb on tourism, suspending all licenses for tourist accommodation for a year, while City Hall conducts an “in-depth analysis” on the subject.

Tourism is a divisive issue in the city, where local residents feel like they are being priced out of the city centre by an increasing number of tourist rentals and that badly behaved vacationers are lowering the tone of the city.

Colau’s changes are mirrored by her counterpart in Madrid, new left-wing mayor Manuela Carmena, who has already given up a number of privileges associated with the prestigious position, such as taking the metro instead of using the mayoral chauffeur-driven car and foregoing the City Hall's VIP box at Madrid's Las Ventas bullring.