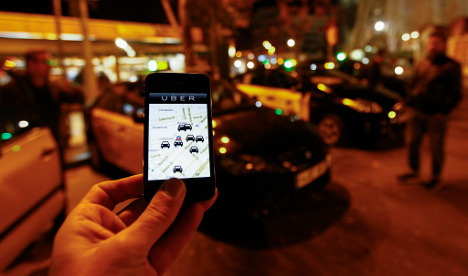 An Uber user looks at the app to find a ride in Barcelona. Photo: Quique Garcia / AFP.

Fedetaxi said on Wednesday that it is working to create an alliance of European taxi drivers against ride-sharing company Uber to “broaden the basis of the taxi sector’s position”.

“Illegal networks such as Uber cannot be regulated using the excuse that they are not a part of the transport sector, but rather exclusively part of the digital market,” the driver association said in a statement. “This is not only false, but also could open the door to dismantling productive sectors such as the transport of passengers, while endangering the rights of European citizens through fiscal and social fraud.”

Fedetaxi said it plans to meet with other European taxi groups in the coming months and formalize an alliance in Brussels. The group also wants to discuss plans for better EU-wide regulations of the taxi industry.

Uber, a San Francisco-based company, has faced challenges from taxi unions in Spain, as well as in countries like France, Belgium and Germany, where cab drivers say the service poses unfair competition and does not properly vet its drivers.

Controversy arose in Sweden recently when a journalist managed to get a position as an Uber driver without having undergone training.

In Spain, Uber was banned in December 2014, but tried to defy the ruling and continue to operate before telecommunications companies cut off service to the app.

Germany has banned the app twice amid persistent challenges by taxi unions.

The company has filed a complaint with the European Commission over its restrictions in Spain, France and Germany.

The company has argued that it is not a taxi service and that it simply offers passengers a way to connect with people who want to share their cars. But critics point out that it is more like a cab service because users tell drivers where they want to go and pay a fixed tariff.

Uber has spread from San Francisco to 300 cities across 58 countries worldwide.