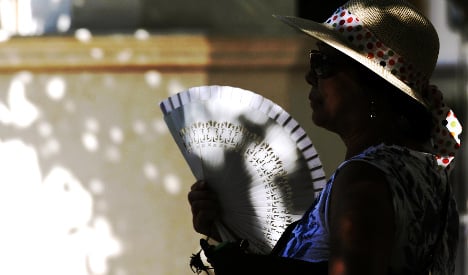 A woman fans herself in Seville during the nationwide heatwave. Photo: Cristina Quicler / AFP.

Temperatures in Xàtiva, Valencia reached as high as 45.9C, which was the highest recording across all of Spain since August 2012.

Other towns across the Iberian peninsula also saw record highs, with Morella baking in 38C – the highest it has been in the Castellón town since July 1984. Zaragoza saw mercury levels hitting 44.5C, which was the hottest it has been since records began.

Temperatures are expected to remain sizzling across most of the country as the Spanish State Meteorology Agency predicted on Tuesday that the heatwave would continue until July 14th.

Only northern and coastal areas in Cantabria and Galicia are expected to have some cloudy skies and light rain in the coming days. Spain is now in its second heatwave of the summer, which began on July 5th. Most of the country has been put on alert for high temperatures and maximum alert for wildfires.

A fire broke out on Saturday due to the heat and forced 1,500 to evacuate their homes as it blazed across 13,500 hectares (33,500 acres) of pine forest and brush. It took emergency crews until Monday to subdue the flames.