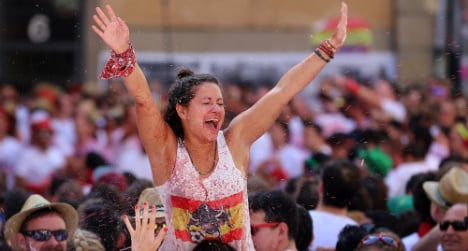 Eight of out ten Spaniards consider themselves happy. Photo: AFP.

Spain has struggled during the last few years: a country ravaged by economic crisis, its unemployment levels consistently the second highest in the European Union, but the country's woes have not made Spaniards unhappy, according to a new poll.

Conducted by Spain’s Centre for Sociological Research, the poll asked Spaniards to what extent they considered themselves happy or unhappy.

See Also: 7 reasons why Spain is the best place on earth

A huge proportion of Spaniards, 84 percent, consider themselves happy. Of those, 51 percent classed themselves as “completely happy”, the poll revealed.

It could be down to the weather, but Spaniards happiness levels have risen since the CIS conducted their January poll, which found that 78.8 percent of Spaniards classed themselves as happy.

The study also questioned Spaniards on their leisure habits and found that they favour the simple pleasures in life: the favourite pastime of 71.3 percent of Spaniards is going for a stroll, while 70 percent enjoy watching television.