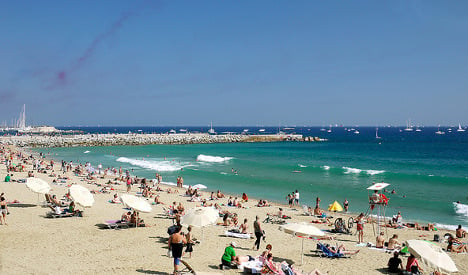 A Carlist group in the northern Spanish region of Asturias has caused controversy by seemingly calling for beaches to be segregated by sex.

“Catholics, preserve your decency in summer, too: Don’t go to mixed beaches!” reads the poster, uploaded by the Traditionalist Group Pedro Menéndez de Avilés to its Facebook page. The poster was accompanied by a list of recommendations that good Catholics should follow during the holiday season in Spain.

The accompanying text, entitled Summer Holiday, includes extracts from the Norms of Christian Decency, a set of rules published by Spanish bishops in 1958.

The text warns people to “avoid mixed bathing” because “it almost always entails close proximity to sin and scandal”.

“The scenes that you see on mixed beaches are often close to sin,” a spokesman for the Carlist group told The Local.

Carlism was a traditionalist, political movement in Spain linked closely to the Church. It was a significant political force throughout the 19th century and up until the death of dictator Francisco Franco in 1975; Franco counted several Carlists among his ministers.

“The nudity of the bodies and the prevailing hedonism can weaken the devout soul,” a spokesman for the group, formed in 2014, told The Local.
“You don't see these kind of scenes in the mountains, for example, there are no semi-naked women and girls, or even men,” the group's spokesman said.
According to the Facebook post, the most dangerous place Spaniards can visit is the swimming pool, “where the reduction in space and the mass of people brings danger even closer”.

The group also includes advice on what people should wear to the beach in order to preserve their modesty.

Men should wear “a simple bathing suit” while women are advised that their swimsuit should “cover their body” and include “a little skirt for when out of the water”.

Not a fan of all-enveloping swimsuits? Check out our nude bathing guide

If bathers can absolutely not avoid going to a mixed beach or pool, the group advises that swimwear should be “more modest” and be used “only when in the water”. As soon as bathers leave the water they should “cover themselves with a dressing gown (bath robe)”.

The Carlist group which fights for “Catholic resistance” against the “current modernist Church” encourages Catholics to search out beaches that are segregated by sex because “some remain”.

“If there are no segregated beaches close by, we think the best option is to not go to the beach,” said the group.

The group also has some advice for tourists; Spain was recently rated the world's most tourist-friendly country, but the group urges tourists to “set an example to their compatriots and to local Spaniards”.

“Of course we oppose these drunk tourists who are infecting our beaches,” the group told The Local.

“We believe that this kind of tourism poses a real danger that is much worse than other “immigration” that is coming from the south,” the group added.

Millions of Spaniards and tourists alike flock to the country's beaches every year. Spain has the cleanest beaches in the world and is in the top ten in the EU for its “excellent” beaches.