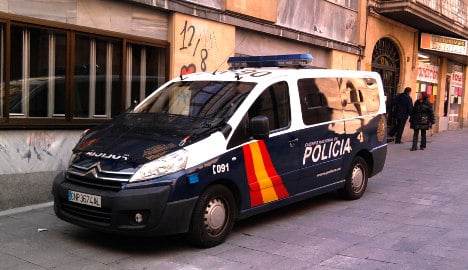 A car of the Spanish National Police. Photo: Kevin B. / Wikimedia Commons.

The woman, who was arrested on Arrecife on the island of Lanzarote, “maintained direct contact with Daesh operatives in Syria,” it said in a statement, using the acronym Deash for the Isis group.

She is “accused of recruiting girls and teenagers, and facilitating their travel to areas controlled by the Daesh terrorist organisation,” the statement added.

The ministry reported that the woman is Spanish and had converted to Islam. The young girls were often appealed to because of their devout religiosity and were sexually exploited and made to do domestic labour when they arrived to their destinations.

Islamic State jihadists control swathes of Syria and Iraq, where they have committed highly publicized atrocities including mass kidnappings and executions.

The arrest comes as European nations scramble to halt a surge in young people wanting to travel to Iraq and Syria to fight alongside the Islamist militants.

Spain has raided a number of alleged recruitment cells, most of them in its North African territories of Ceuta and Melilla as well as in Catalonia in the northeast of the country.

On April 1st, a Moroccan living in Catalonia was remanded in custody after allegedly seeking to send her 16-year-old twin boys to fight with jihadists in Syria, a year after another of her sons died there.

Spain's interior ministry announced in March the arrest of two suspected Islamists in Ceuta on suspicion of belonging to a cell believed to be preparing attacks.

More than 100 people from Spain are suspected of having joined jihadist fighters in Iraq and Syria, and fear they may return to launch attacks.

Hundreds more such radicals from France, Britain and Germany are also thought to have traveled to those countries to fight.

Spain raised its terror alert alert to four on a scale of five on June 26th following deadly attacks in France, Tunisia and Kuwait.

It is the highest alert level since Al-Qaeda inspired bombers blew up four packed commuter trains and killed 191 people in Madrid on March 11th 2004.

The heightened alert calls for increasing police presence on city streets as well as at airports, railway and bus terminals, nuclear power plants and electrical installations.