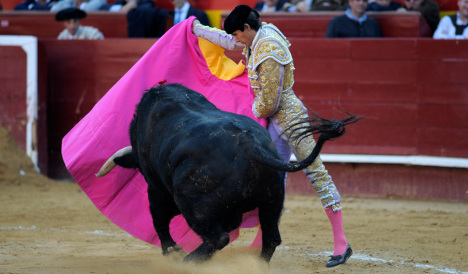 A photo of a bullfight in Valencia. Photo: Jose Jordan / AFP.

The mayor of the Valencian town of Paiporta has reported to police that people have been posting death threats against her on the Facebook of her predecessor after her government announced the city would not subsidize bullfights, news agency EFE reported.

Pro-bullfighting commenters flocked to the Facebook page of the town's previous mayor, Vicente Ibor of the conservative Popular Party, to complain about the decision, singling out the town's new mayor in particular:

“Just like she took the bulls away from us, I will kill her”, wrote one commenter, while another threatened to lock her up with a massive “fierce” bull.

Ibor had written on Facebook that Martin and her left-wing political allies' plans were “unacceptable” and that it was like “kidnapping someone in their own home”.

“We are not going to accept that the radicals – without winning the election – can prohibit and diminish our traditions,” Ibor wrote.

Martin reported the messages to the local police last Thursday, which were then transferred to the Civil Guard to investigate whether they constituted a crime.

The authors of the two posts, as well as four people who liked the comments, are scheduled to testify in court on Thursday July 9th.

Martin said that she considered Ibor to be the “instigator” behind the comments and accused him of inciting violence, saying he has started a smear campaign against her since she took office.

“Freedom of expression is one thing, but it's another thing to encourage threats,” she said.

On Twitter, Martin wrote: “The former mayor of Paiporta inciting violence and allowing death threats on his Facebook page is more than just acting irresponsibly. #Crime.”

She also has emphasized that the city is not prohibiting bullfights, but rather is eliminating city hall subsidies to bullfights in order to devote those funds to social emergencies, as promised during her campaign.

Martin's police report apparently did not stop Ibor from posting more criticism on social media, writing on Twitter and Facebook that “the mayor with the least popular support in the history of Paiporta doesn't like when people think differently”.

“They are blocking dissenting opinions on the city hall Facebook and dare to denounce those who exercise freedom of speech to support bullfighting,” he continued on Facebook. “The radicals will not be able to cover the mouths of the people as we get sick of all of the exclusions and undemocratic things and I fear that this is only the beginning.”

Eight bullfighting clubs have been affected by the cuts, but Martin said they have not been negatively impacted.

Catalonia and the Canary Islands have banned bullfighting, but members of the ruling PP have tried to get the blood sport protected as part of Spanish cultural heritage, raising concerns about whether it could return to those regions.

The new government in San Sebastian recently lifted a three-year-old ban on bullfighting to reintroduce the tradition.