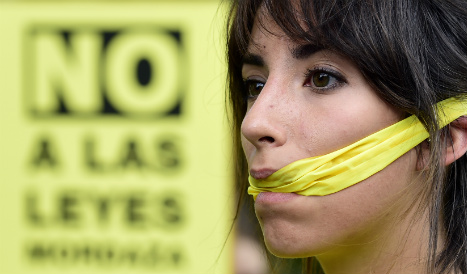 Spain’s new public security law, which came into force on July 1st, was met with protests around the country, its opponents claiming the law harked back to the repressive days of former Spanish dictator, Francisco Franco.

And a new poll has revealed that the vast majority of Spaniards, three quarters of the population, oppose the new law, which critics say limits free speech and curbs the right to demonstrate.

The law was passed with the support of only the ruling conservative Popular Party (PP), but even among the PP's conservative supporters the law remains unpopular, with almost half (44 percent) opposing the law.

The poll, carried out by Metroscopia and published in Spanish daily El País on Monday, found that “the so-called gag-law has reached levels of opposition rarely seen in Spanish politics”. A huge majority of Spaniards, 75 percent, oppose the law. In one of the capital’s most dramatic protests, two Greenpeace activists scaled a crane outside the Spanish parliament in Madrid, unfurling a giant banner with the message: “Protesting is a right” (above).

The poll also reveals that 63 percent of Spaniards support the complete repeal of the law while a mere 21 percent think the law should be kept as it is.

Opposition to the law has risen seven points since December 2014; in Metroscopia’s previous poll 68 percent of Spaniards did not agree with the law, compared to the 75 percent in the new poll.

The law has been controversial since it was first conceived in response to the increase in – mainly peaceful – anti-austerity protests in late 2013 and early 2014.

It has received criticism from human rights groups, lawyers’ associations and journalists for muzzling freedom of speech.

The president of Spain’s General Law Council, Carlos Carnicer, said the law had “kicked the country to the right”.

The law has brought in a series of fines for public order offences, which range from €30,000 to €600,000. Spaniards could be fined up to €600,000 for protesting outside public buildings, while taking photographs of police officers and using social media to instigate protests are also banned.