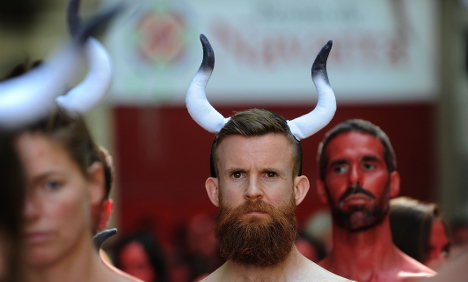 Activists of the PETA and Anima Naturalis pro-animal groups sporting horns during a protest against bullfighting and bull-running. Photo: Ander Gillenea/AFP

Activists from People for the Ethical Treatment of Animals (PETA) and Anima Naturalis, wore fake horns while holding signs reading “Pamplona's streets are stained with bull's blood” in several languages.

“Dozens of bulls suffer injuries while participants follow them, hit them and terrorise them along the route to their death”, they said in a statement.

The yearly festival of San Fermin, held July 6-14, attracts hundreds of thousands from around the world who literally run from bulls released in sectioned-off parts of the city.

Revellers and bulls hurtle through the streets before arriving in the arena where the animals are eventually killed in traditional bullfights.

According to PETA, the bulls are brutalised with electric shocks and sharp sticks, and are injured while running to the ring. The organisation has demanded that Spain put an end to the tradition.

The Pamplona run is not the only controversial Spanish tradition involving bulls — others include placing a burning object on the animal's horns, which often ends with the bull burning itself trying to get free of the flames.