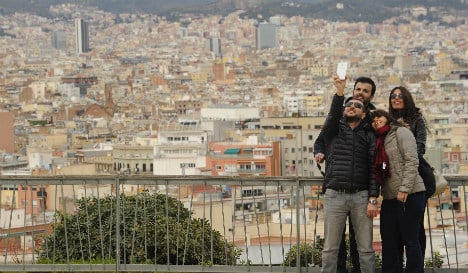 Tourist accommodation licenses will be suspended for one year. Photo: Josep Lago/AFP

The licenses cover a variety of lodgings such as hotels, hostels, bed and breakfasts and tourist apartments.

Colau, 41, an anti-eviction activist and one of the leading lights of the Indigandos protest movement who swept to power in May, had promised to tackle the issue of controling mass tourism to the Catalan capital.

The new city council announced on Thursday that it had suspended all tourist licenses for a period of one year while it came up with a plan to regulate tourist accommodation in the city.

Locals have been complaining for some time that the centre of the city is being overrun with tourist rentals, driving up prices and pricing out Spaniards from the property market.

The measure is “provisional and precautionary” Colau said during an interview with radio station, Catalunya Ràdio, adding that, “tourism is an asset that the city needs to take care of and make more sustainable because it created tensions”.

The aim of suspending the licenses was to “put things in order instead of putting out fires,” said Colau, according to Spanish daily, El País. Barcelona City Hall now aims to undertake an “in-depth analysis of tourist accommodation” that will allow it to “evaluate and diagnose the existing accommodation and the economic and social impact it has on access to housing, how crowded the city is, mobility, diversity of usage and the production and management of unused spaces”.

Colau said she will convene a municipal tourism board that will work to carry out the plan for more sustainable and responsible tourism that was launched by Barcelona’s former mayor, Xavier Trias, back in April 2015.

Tensions have been growing between locals and tourists in the Catalan capital after a series of “badly behaved tourist” incidents.

Locals are also disgruntled at how the central neighbourhoods of the city are becoming overrun with tourist accommodation; pricing out Spaniards from the city centre.

She has also said she will stop the construction of a large supermarket and block the expansion of two others to help preserve small shops.