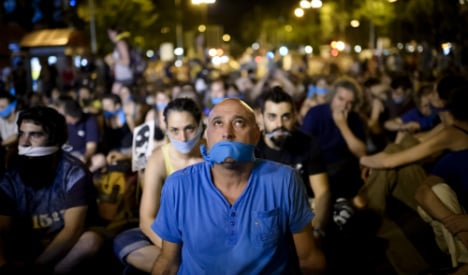 Spaniards have been protesting as the country's new "gag law" comes into force. Photo: Dani Pozo/AFP

Spain brought in its new public security law on Wednesday limiting freedom of speech and curbing the right to peacefully protest with the introduction of fines ranging between €100 ($111) and €600,000.

The Local takes a look at some of the more repressive points of the controversial law dubbed the  Ley Mordaza or “gag law”. Under the new law, anyone who organizes or takes part in an “unauthorized protest” could be fined between €30,000 and €600,000 if the protest takes part near institutions such as the Spanish parliament.

Disrupting events such as public speeches, sports events or religious ceremonies could face fines of between €600 and €300,000.

The Spanish tradition of getting together with mates for outdoor drinking sessions looks to be officially over – drinking in public will be hit with fines of €600 under the new law. And teenagers won’t escape – Parents will be held responsible for the payment of their offsprings' fines.

Using Twitter, Facebook or Instagram to call on people to protest will be fined under the new law, an attempt to put paid to the spontaneous protests that have proved very powerful in building the indignado movement. People will be fined for taking unauthorized photographs of the police, a measure introduced with the argument that being publically identified could put officers and their families in danger.

It puts an end to the laissez faire attitude that has seen Spain become a nation with one of the largest potsmoking populations in Europe. But from now on lighting up a joint in bars or on public transport could result in a fine of between €600 and €30,000.

7) Leaving furniture in the street

It is a tradition that has existed in Spain long before the current upcycling trend but from now on dumping unwanted furniture in the street could come with a penalty. Those caught obstructing streets with old furniture, cars or other unwanted items will be fined.

8) Trying to stop an eviction People trying to stop an eviction from taking place could be fined between €600 and €300,000. The number of evictions in Spain has skyrocketed since the beginning of the economic crisis. New Barcelona mayor, Ada Colau (pictured above) has been a famous anti-eviction activist.

9) Not having your ID

Spaniards who are asked to show their ID card and do not have it on their person could be in trouble under the new law. If they cannot immediately locate it at home and have failed to report it missing, they are liable to be fined.

Showing a “lack of respect” to those in uniform or failing to assist security forces in the prevention of public disturbances could result in an individual fine of  between €600 and €30,000.