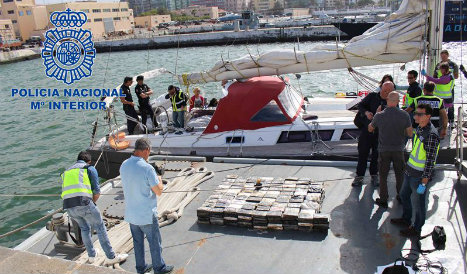 Police 3.5 tonnes of cocaine in the bust. Photo: Interior Ministry

A total of 69 people were arrested, mainly in Spain and Portugal, as part of the operation which was carried out in cooperation with police in Australia, Britain, Croatia, Germany, Montenegro, Portugal and Serbia.

Among those arrested was the leader of the ring who lived in luxury in Madrid where he pretended to be a football scout, police said in a statement.

The drugs were sometimes transported in large sailboats, but the main method used by the group was to sneak huge quantities of cocaine on merchant ships bound for Spain.

Once the ship arrived in Spanish waters, crew members, who were part of the ring, would throw bags of cocaine overboard which would be picked up by small boats and brought to ports on Spain's Mediterranean coast.

Another system used by the group dubbed the “blind hook” consisted of hiding the cocaine among other goods being legally shipped to Spain without the importer's knowledge.

The ring allegedly used a money transfer firm to launder the cash earned through drug smuggling.

The money transfer firm, which had offices in Madrid, Barcelona and the northwestern Spanish city of Vigo as well as the Portuguese capital Lisbon, charged a commission of five percent of the amount of money which it laundered.

The cash was sent to Portugal hidden inside vehicles and then transferred to bank accounts in Brazil.

Police suspect the network could have sent over €50 million to Latin America using this system in the past few years.

The authorities arrested 26 people in Spain as part of the operation, 28 in Portugal and 15 in the Balkan nations of Croatia, Serbia and Montenegro.

The biggest haul of cocaine in Spain dates back to 2006 when 49.65 tonnes were seized.

In July 2011, Spanish police seized €25 million in cash, a European record, during an operation against drug money laundering.