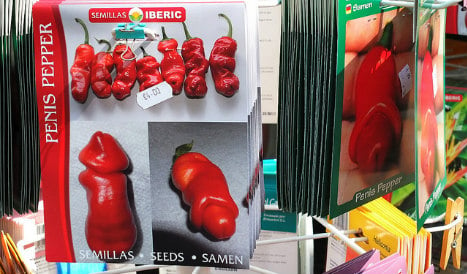 Penis peppers are just one of the variety of rude seeds available in Barcelona. Photo: ludovic/Flickr

The seeds grow into fruit that resemble male and female genitalia; one grows into a pepper that resembles a penis while another becomes “a vulva flower”. Melons that grow into breasts (with nipples) are also on sale.

Let me just grow some melon tits and penis pepperspic.twitter.com/Dt0vvvNUem

“People stop a lot to look at them and take photos with them,” a stallholder told Catalan daily, La Vanguardia.

Some stallholders are customizing the seed packets, which cost between €3 and €4 adding “Barcelona” or “La Rambla” to make them even more of a souvenir for tourists eager to take something a little bit out of the ordinary home.

Flower sellers branched out into the lewd legume business about two years ago; before that the seeds had been sold mainly on the Costa Brava and other tourist resorts along the Catalan coastline.

Once one flower stall started selling the pervy perenials, others followed suit, realizing that they were fast becoming sought-after souvenirs with tourists.

Rosa explained that the peppers are actually deformed, which is why they end up resembling phalluses.

Tourists snap up the Penis Pepper, Vulva Flowers and Melon Tits, just some of the risqué varieties of seeds you can buy along Barcelona’s main tourist drag.

“Lots of schools and children walk past here,” Carolina Pallés told La Vanguardia, “I don’t think this is the image that we want to project to tourists or locals.”

Barcelona has faced problems due to its high numbers of tourists over recent years and new mayor Ada Colau has promised to introduce controls to limit mass tourism.

The city has become a victim of its own success with many locals now complaining of “badly behaved” tourists ruining the city.