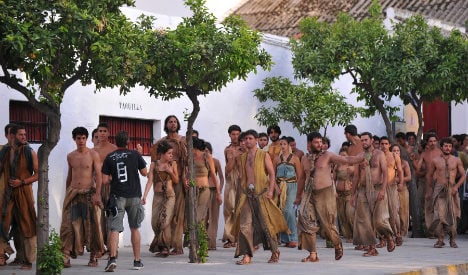 Extras from Game of Thrones during filming last year in Andalusia. Photo: AFP

After frenzied anticipation the auditions were announced on Saturday and will be held Monday and Tuesday at a conference centre in Devesa park in Girona.

Dozens camped out overnight at Fira De Girona and by Monday morning a queue of hundreds of people were waiting for the chance to appear in the Season Six of the popular fantasy drama.

Modexpor International Casting, a company based in Malaga southern Spain company charged with supplying extras for Games of Thrones, said it was looking for men and women between 18 and 65 years old to take part.

They were quite specific about what characteristics potential extras should have. Only thin people need apply, and forget it if you have tattoos.

Men must be in good physical condition (But not bodybuilders) with either short, medium or long hair, while women should have long hair of “uniform colour”.

In a statement, the company said: “We don’t want hair that is coloured green, red, purple, blue, pink, or with 'California streaks' etc.”

Although thousands were expected to turn up, the number invited to take part in the auditions would be limited to 1,200 men and 1,200 women, the company said.

Another casting will be announced soon to recruit extras for scenes to be filmed in Peñíscola, in the Valencia region.

Filming in Girona will take place between 6 and 18th of September and the successful applicants will earn €50 a day.