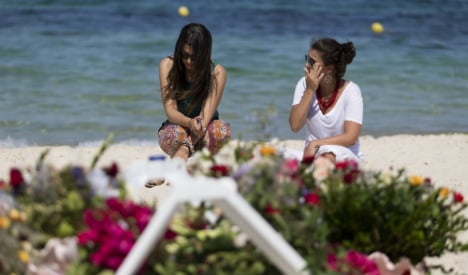 Tourists mourn at the site of the beach attack. Photo:KenzoTrinouillard / AFP

Mallorca based Riu hotel chain, which owns the Imperial Marhaba in Sousse, said staff “raised the alarm immediately that they heard shots being fired”, according to a report in the Balareric local newspaper Ultima Hora.

But they claim that it took security forces almost an hour to arrive at the scene, an hour which saw lone-gunman Seifeddine Rezgui, stroll along the beach firing at sunbathers.

A total of 38 people have died, while six others remain in hospital in a “serious condition”.

The newspaper report sited sources close to the management of the hotel chain who had spoken to receptionists about the sequence of events.

The account from hotel staff differs to that of Tunisia’s own Interior Ministry who claim the alarm was not raised until the massacre was well underway.

Tunisian investigators said they were seeking one or more accomplices to the 23-year-old killer, who was shot dead by police.