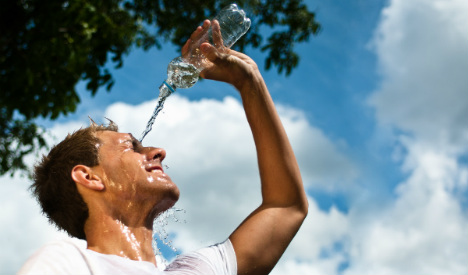 Temperatures across Spain will exceed 40C this week. Photo: Shutterstock

Spain’s weather agency, AEMET, has put 43 of the country’s 50 provinces on alert for high temperatures, as the mercury rises across the Iberian Peninsula.

The south of the country will experience the highest temperatures, with Córdoba put on red alert with the thermometer expected to reach 43C, while Seville will see a close 42C on Monday. The central Spanish city of Toledo will also experience highs of 42C, according to AEMET.

The capital does not escape the heat – Madrid’s temperatures will reach 41C as will Jaén, Badajoz, Cáceres and Ciudad Real. Cuenca and Guadalajara will both experience temperatures of 40C.

For those jetting off on holiday to Mallorca, the island is set to experience highs of 36C, while Ibiza and the Canary Islands will be a balmy 34C.

From Tuesday, temperatures will decrease in the north eastern region of Galicia, as well as in Extremadura and Andalusia, while the rest of northern Spain will see temperatures rise.

Some areas of the country, especially the northern regions and the Canary Islands, will see areas of cloud on Wednesday and can expect light rain.

The only provinces not on alert for the heat are Cantabria, Bizcaia, Gipuzkoa, Castellón, Murcia,  Málaga y Santa Cruz de Tenerife.

“These are not usual meteorological phenomena, of an exceptional intensity and with a very high level of risk for the population,” a spokesman for Spain's national weather office said.

Beaches across Spain's southern coast were packed as the heatwave coincided with the start of the high season for tourism.

Nearly all of Spain faced an “extreme”, “very high” or high” risk of forest fires on Monday, according to the nation's weather office.

Local authorities banned the use of firecrackers near wooded areas and urged smokers not to throw away cigarette butts.

Madrid city hall issued a series of guidelines, including advising everyone to remain hydrated throughout the day by drinking at least three litres of water per day and avoid drinking alcohol.

It also warned residents to keep their windows open and their blinds drawn and avoid being out in the streets between noon and 6:00 p.m. when temperatures are at their highest.

France was also bracing itself for a heatwave, expected to be the hottest for ten years, while Italy was set to be engulfed by hot winds blowing in from Africa.